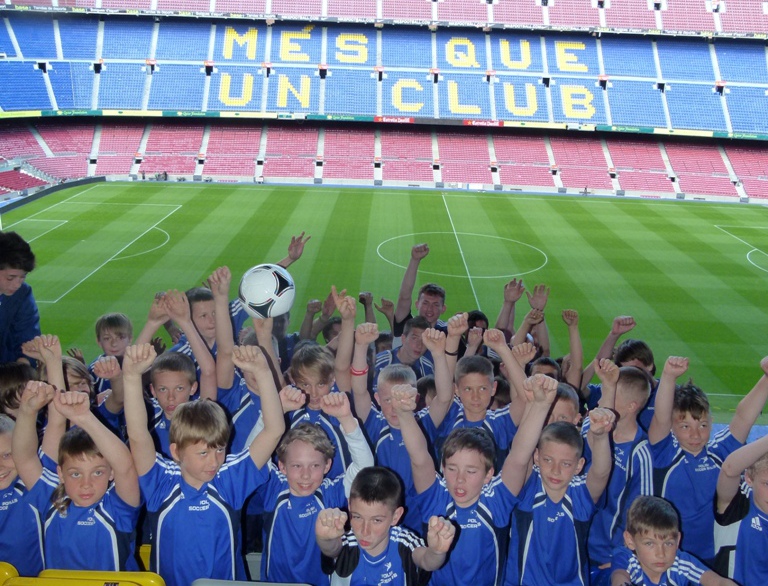 Trips abroad for the best players!

On all of Polish Soccer Skills camps, skills tests are conducted and their aim is to classify the best players. That is how we emerge Winners of the camp who as an award will go to train abroad. This way, we want to equal chances of young, Polish players with their peers in the football-developed countries. We want to show them the best foreign clubs, the best training methods and for some, create the possibility of signing up professional contracts with Western clubs. Below, we present the history of out trips abroad in which Polish Soccer Skills camps’ Winners took part.

Now you can go on a camp abroad along with the Winners!

Get to know the Winners of the previous editions

Winners of the 2018 Winter Camps will be rewarded at the training camp in GERMANY! They will visit German champions and vice-champions clubs and will receive nominations for the PSS Team!

Our players had their first two training sessions at the facility where Paul Pogba grew up. The training was carried out by Diouf Mamadou, who was in Cannes with Zinedine Zidane and Patrick Vieira. The players from U.S. Roissy Football welcomed our Winners and shared their experience. In an organized exhibition match, we showed good teamwork which resulted in a victory :) The next day the winners had the opportunity to watch PSG - Nice live (3:0) at the Parc des Princes stadium. In addition, they learnt the charms of Parisian architecture. They saw the Notre Dame Cathedral, the Louvre Museum, the Arc de Triomphe, the Eiffel Tower, and spent the whole day in the fantastic Asterix Park. However, the most important distinction was the fact that our players, as ones of the few, had the opportunity to train in the most important football centre in France, the training centre of the French Football Federation in Clairefontaine. This is an extraordinary distinction for our winners, because it was where French players prepared for the most important football events. We hope that those 2 training sessions in that great atmosphere will result in future success.

Winners of the 2017 Winter Camps went to Spain! In Madrid, the participants trained at Atletico Madrid’s facilities, visited the Santiago Bernabeu and other beautiful places. Additionally, on the pitch of the first team of Real Madrid they held a meeting with the coach of Real Madrid’s goalkeepers - Luis Llopis. In Barcelona, ​​the players had training sessions with Barcelona FC youth coach - Mark Reyes, and motor movement coach - Jose Rodriguez. The motor movement training took place on the beach near Casino Barcelona, ​​which was an interesting experience for our players. The participants visited the picturesque Park Guell and Europe's largest stadium, Camp Nou, where FC Barcelona plays. 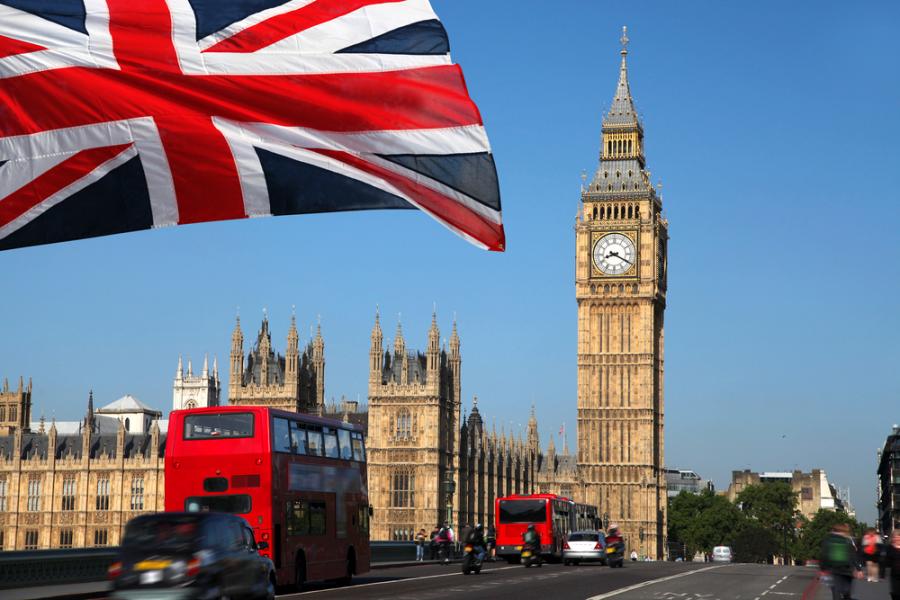 Polish Soccer Skills’ camp winners Winter 2016 as a reward went on a trip to London funded by us. Winners trained with coaches from such academies like Chelsea London, Tottenham Hotsput and Arsenal. They also visited the most important stadiums and touristic attractions in London. Additionally, they watched live football match of Premier League: Chelsea London versus Tottenham Hotspur! Participants trained in centres such as Wembley, Chelsea and Arsenal! 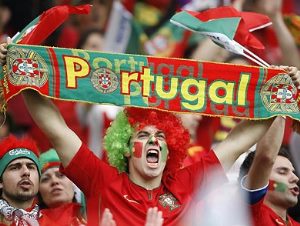 The winners of Polish Soccer Skills camps Summer 2015 who have achieved the best scores in the skills tests on the camps as a reward went on a camp to Portugal founded by the Foundation of Polish Soccer Skills. The players not only visited stadiums and museums of such clubs as Sporting Lisboa, Benfica Lisboa, FC Porto, Os Belenenses, but also took part in trainings and friendly matches with Portuguese teams and watched FC Porto VS Sporting Braga match live. Training sessions for players of Polish Soccer Skills were led by Portuguese coaches from Primera Liga clubs, among others Os Belenenses and Sporting Lisboa. Polish football players played a few friendly matches with Portuguese peers from Sporting and Os Belenenses clubs and they won all of them. In Porto the main highlight of the trip was a private meeting with all the players of the first team of FC Porto during a closed training. Polish Soccer Skills players had the opportunity to talk, gather autographs and take photos with players such as Iker Casillas, Juan Lopetequi, Alberto Bueno, Cristian Tello and Maximiliano Pereira. 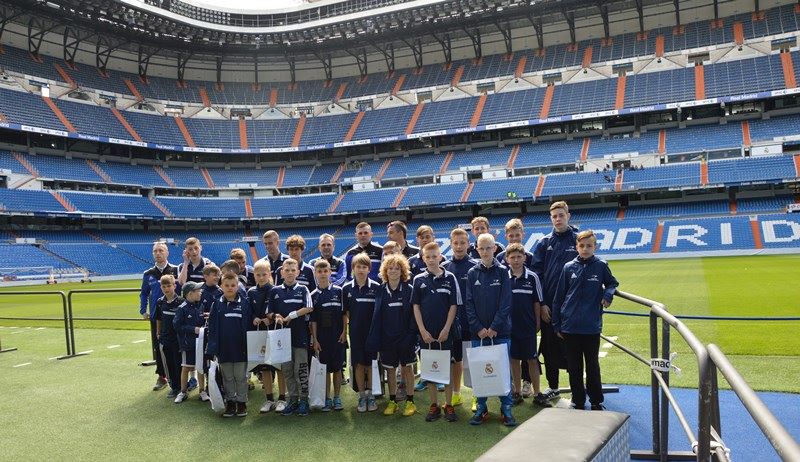 Polish Soccer Skills has founded a training trip abroad for the winners of the camps for the tenth time already. Jubilee Winners’ Camp for the best participants of winter camps took place in Spain. A weekly stay in the country of the Europe champions included a visit to Madrid, Córdoba and Seville. In Madrid Polish Soccer Skills’ players were accommodated in the Training Centre of the Spanish Representation – in the same rooms as the best Spanish football players; they also trained on their facilities. Training under the guidance of Polish and Spanish coaches were observed by, among others coaching staff of the Representation of Spain of U- 17’s with their first coach Santiago Denio Sanchez, preparing his team for the European Championships. Our trainings were also observed by the one and only Vicente del Bosque who applauded Polish Soccer Skills training methods. The players watched Atletico Madrid VS Elche match live, visited the stadium of Santiago Bernabeu, the museum of Real Madrid and the museum of the Representation of Spain. Then they went to Andalusia where friendly matches with peers from Córdoba were awaiting. Then came the time to visit Seville where they had a meeting with Grzegorz Krychowiak who among others told them how important a diet is when it comes to a football career. In Seville our players played matches with Sevilla FC teams and trained with coaches from Primera Division club. The biggest impression made on Polish Soccer Skills players was a coach Paco Gallardo, who as a football player went through all the levels of the Representation of Spain, played with stars such as Xavi, Iniesta, Ramos and is currently a coach of the representation of Andalusia of U16’s.

The Winners of the Polish Soccer Skills summer camps 2014 went to Manchester. They had the opportunity to see a match Manchester United – Crystal Palace on Old Trafford, they visited the stadium Edihat, where Manchester City plays, the stadium Old Trafford, where Manchester United plays and the National Football Museum.They played a few exhibition games with some teams from Curzon Ashton. They practiced with English coaches from the academy of Manchester City and with ex-coaches of Manchester United. The training was run, among others, by the great coach Jimmy Ryan who had been Sir Alex Ferguson’s assistant. We went also to Liverpool to practise with the coaches from the academy of Everton. Our Winners met the Manchester United player Jonny Evans and with the ex-representative of the Poland national football team and ex long-term player of Manchester United, Tomasz Kuszczak. At the very end our Winners visited the training center of the England national football team – St Geroge Park. We could perform there some training sessions and tests, for example the response speed test. 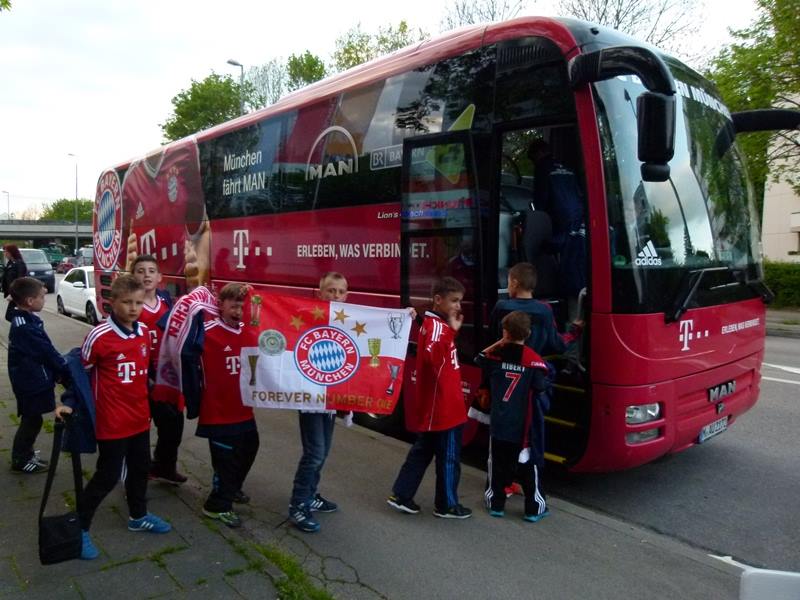 The winners of the Polish Soccer Skills summer camps 2013 were awarded with a trip to Madrid. Our players practiced on training objects of the Spain national team with the selector of the youth Spanish teams and with ex-coach of the first team of Atletico Madrid. One of the main attractions of the trip was seeing in the flesh the training session of Spanish team before its match with Georgia and receiving autographs from its representatives. To stand next to players such as Xavi, Valdes, Casillas, Iniesta or Mata is a dream coming true for many young football players. The participants of the camp played some exhibition games with Spanish teams, for example with junior teams Rayo Vallecano from the Primera División and with representatives of the junior national teams. For the young football players it was amazing to visit the stadium Santiago Bernabeu, the Real Madrid Museum and the Atletico Madrid stadium: Vicente Calderone. At the last training session of the Polish Soccer Skills, Aitor Karanka, the assistant of Jose Mourinho from Real Madrid, paid us a visit..

It was an unforgettable week full of attractions. During the camp the players met with Zinedine Zidane, who accompanied them while visiting the stadium Santiago Bernabeu. They had training sessions with the selector of the youth Spain national team, Miguel Angel Martinez, with the mentor of Pepe Guardiola, Juan Manuel Lillo himself. They slept and practiced on training objects of Atletico Madrid. They saw the Atletico Madrid stadium: Vicente Calderone and training objects of Real Madrid. They say training sessions of Real Madrid youth teams. They also visited Madrid and Segovia.

The Winners of the Polish Soccer Skills winter and summer camps 2012 and 2011 went to Barcelona.

The Winners visited the FC Barcelona stadium: Camp Nou and the Espanyol Barcelona stadium. They had training sessions with the coaches from the Espanyol Academy and played some exhibition games with Catalan teams. Training sessions were held in a training center, where the pitches are right next to the beach. The Winners had also some fun on the beach and did some sightseeing in the beautiful Barcelona. 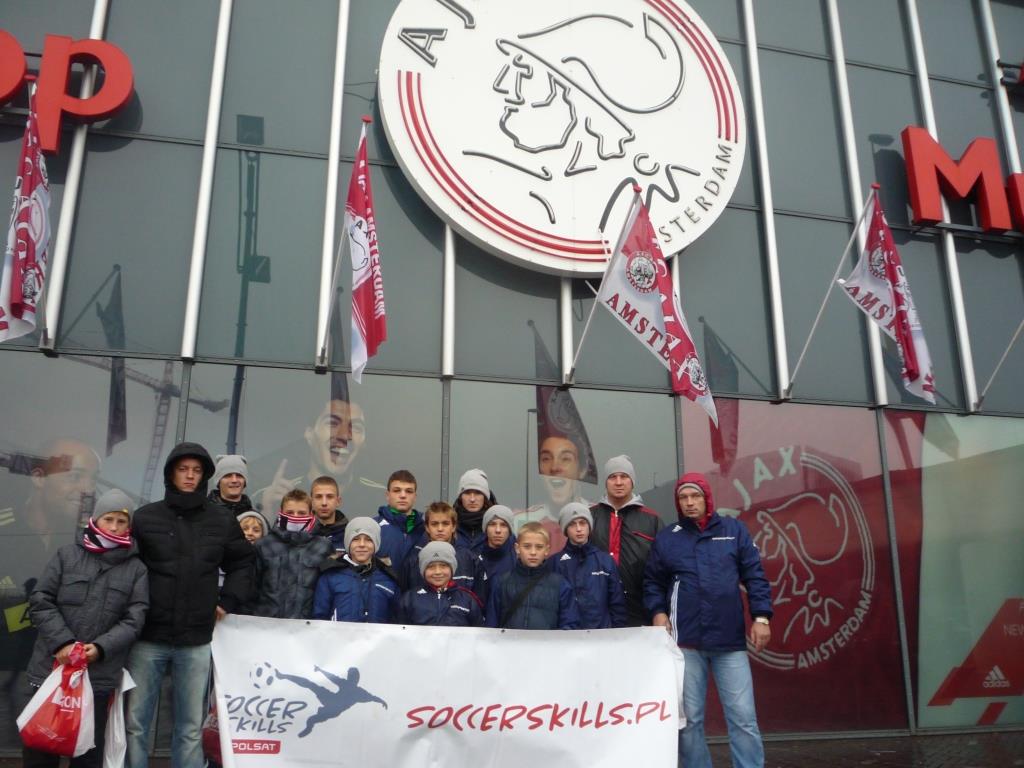 The Winners of the Polish Soccer Skills winter and summer camps 2010 went to the Netherlands.

AJAX AMSTERDAM, PSV EINDHOVEN, NEC NIJMEGEN, FEYENOORD ROTTHERDAM – those are the clubs visited by the Winners of our camps.

Boys had training sessions with the coaches of Ajax, they met Leo Beenhakker and visited four biggest stadiums in the Netherlands: Ajax Amsterdam, Feynoord Rotterdam, PSV Eindhoven and NEC Nihmegen. They had the opportunity to see in the flesh a match of Ajax.

The Winners of the Polish Soccer Skills summer and winter 2009 went on a training trip to AC MILAN. The Winners not only visited the stadium San Sirro, but they also had the chance to practise with all of the AC Milan coaches.

Radosław Majewski, on that time an representative of the Poland national team and a Nottingham Forest player, went on a trip to Milan with the Winners.

Congratulations for all the Winners, we wish you more football successes. 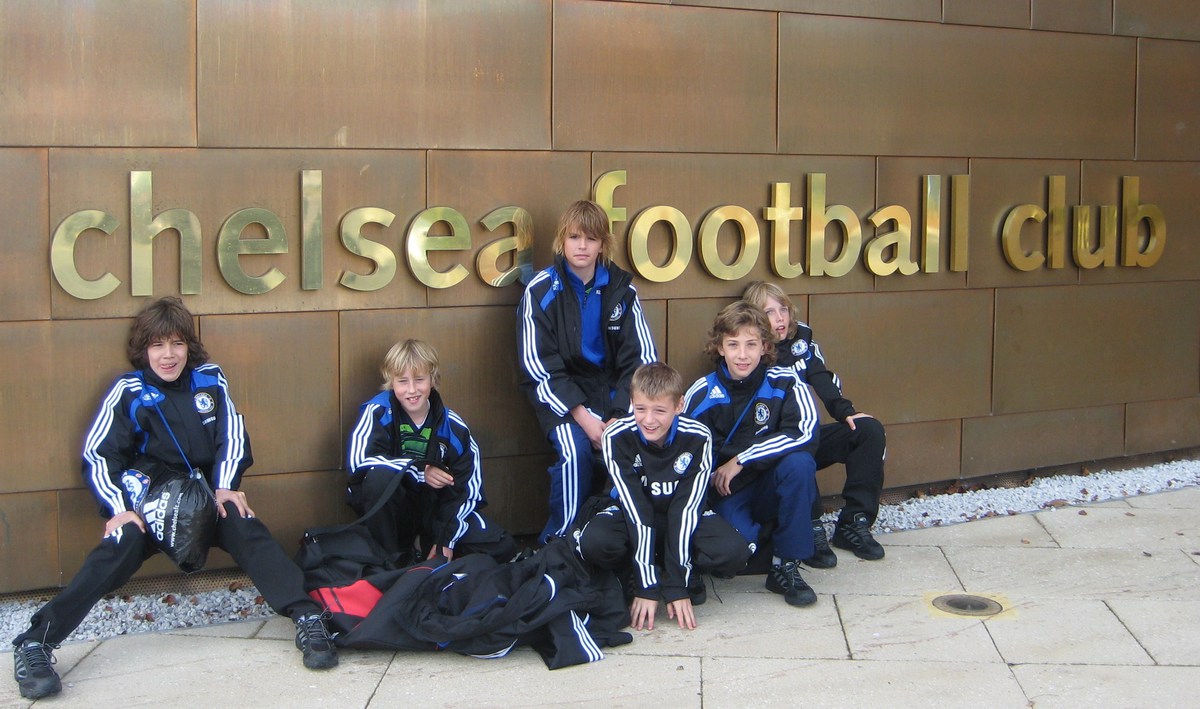